Everyone's making such big strides these days. August's OT asked how he would do pushing a push toy and I told her he couldn't do it. I was so wrong! He tried it today and just did it. August is still saying a lot of "mmmm's." We'll hear some 'aaahhs" and what we call "growling" pretty regularly now too. When I feed August I say, "August, bite." It sounds super annoying, I know. The other day he was kind of looking off into space while I was trying to get him to eat. He then turns to me and says, "bite." I couldn't believe it as he has never said anything like that before. August still loves to wrestle with Luke and Henry and really loves his brothers to "get him". He's still eating baby foods, but I've been adding oatmeal to his food to give it a little more texture. He's not putting food in his mouth, but he will in time. August has been out more lately and he's done really well being in new surroundings. He's got another eye surgery this Friday to work on his muscles (Saturday update: it went great and he is doing well). He's an amazing little guy.

Luke is awesome. Luke's walking pretty fast these days. He's enjoying walking backwards and also spinning in circles. He also broke out some fairly incredible dance moves the other day. Luke's got a language all of his own. He'll surprise us by saying random words. He came up behind me recently and said, "What are you doing?" I turned around and said, "Nothing, what are you doing?" It was so funny because it was so out of the blue and seemed just as natural as can be to ask me this. Luke has been enjoying walking down the block on the sidewalk and is already mature enough to not feel it is necessary to hold his Mom's hand. Luke is still really into throwing things. He now throws toys, food, whatever and says. "No, no, no" all while shaking his hand and pointing his finger.

Henry is so sweet. Henry is so happy and fun to be around. He's walking pretty fast, but can't outpace Luke, yet. He's saying a lot of words and is really into cars. Henry's still fascinated with his cars pajamas and is counting down the days until it's cool enough to wear his cars pajama pants. Henry is eating like a champ and is still the smallest guy. I can't believe he's only three pounds lighter than August and Luke (he's about 22 1/2 pounds now). He's a lean, fighting machine and is probably stronger than August and Luke. I think he does sit ups at night in his bed. Henry and August still love to converse at night when they're supposed to be asleep. They've finally let Luke in on the action and we often hear lots of laughing from their room.

I sure love these three little guys. 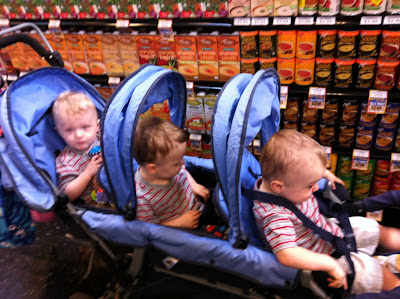 This is our third triplet stroller. Seriously, we have three triplet strollers right now. The three strollers on top of three boys, three beds, three highchairs, and about three hundred thousand toys all in a 1600 square foot house. I can't wait to tell the boys someday, "When I was your age we raised you boys in a moderate little house and we all survived." The first triple stroller was great, but the boys outgrew it. I bought a running triple stroller, but it's too wide to go through doors. So, I purchased the above stroller off of Craigslist and it's doing the trick. We also have three umbrella strollers, that we store in the car. We're really into threes.

Alixe, August, and Carly. Thanks for babysitting!
# posted by Ashley @ 7:05 AM 0 Comments 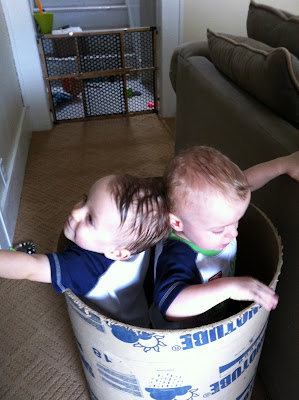 Henry ponders, "Will it ever rain?" 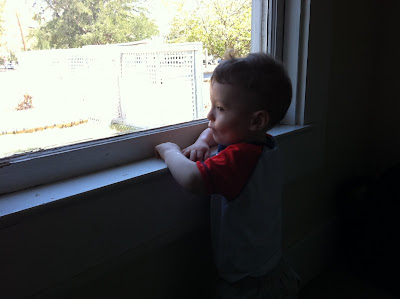 Who broke the bed? That would be Luke. 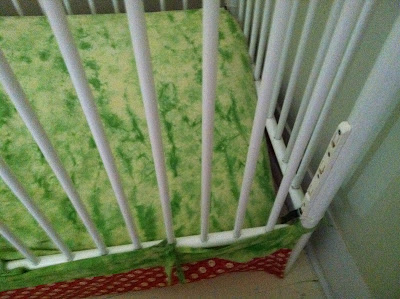 August, Henry and Luke. Henry is quite partial to this cars pajama shirt. He's started pulling it out of his clean pajama basket and carrying it like a blanket. Other times, he'll bring it to me to put it on him. He's quite the fashionista. 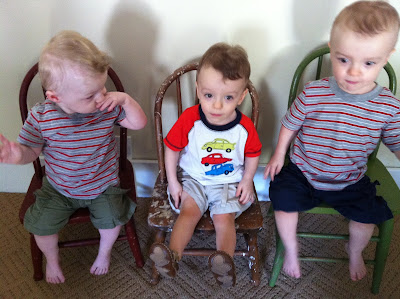 August is a real Ladies Man. August really loves his girlfriends the Canute girls. By the looks of this picture they seemed to be quite taken with him as well. 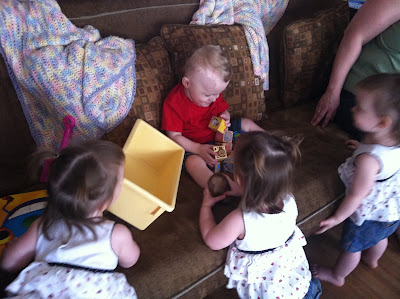 Triplet boys, triplet girls and a sweet little Daniel. Thanks Jennifer for letting us come over again. We had a great time. 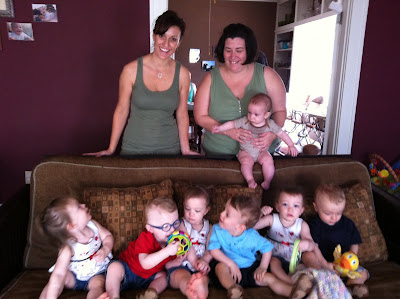 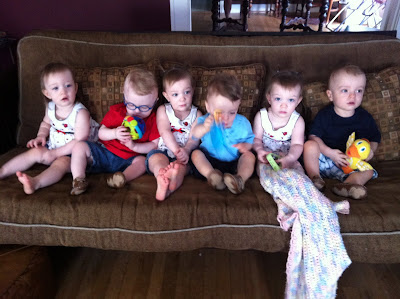 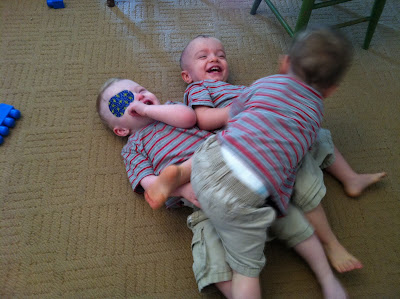 The boys meet their cousin, Caden, for the first time. 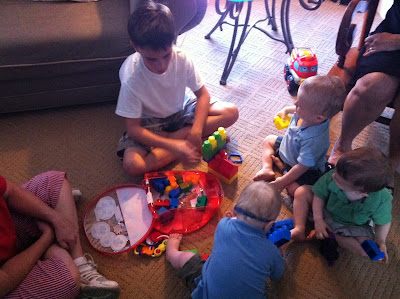 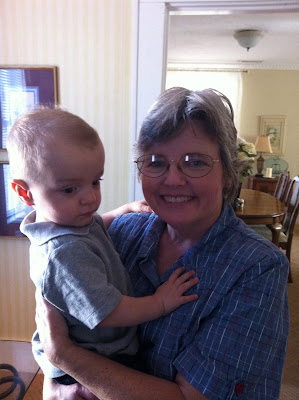 Per Henry, "GrandMommy said it was ok to get up here." 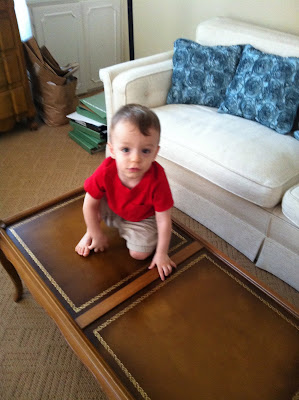 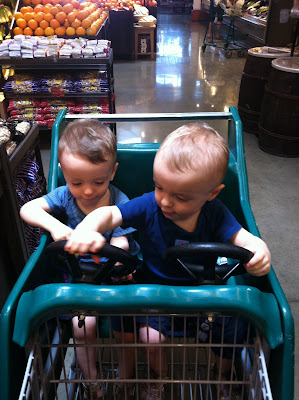 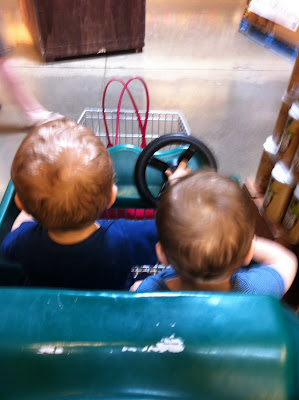 "You been farming long?" Part 2

Of note, Henry has finally decided to walk full time. This kids future is bright and it's like he's got the whole world in his hands or something. 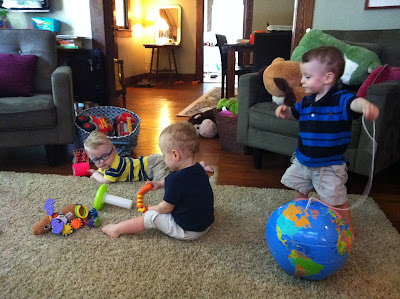 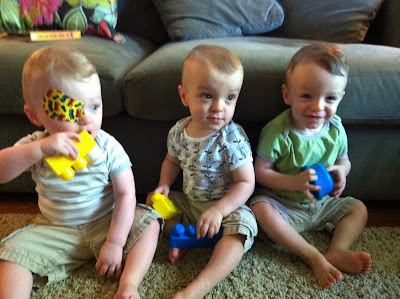 Henry is one laid back kind of dude. 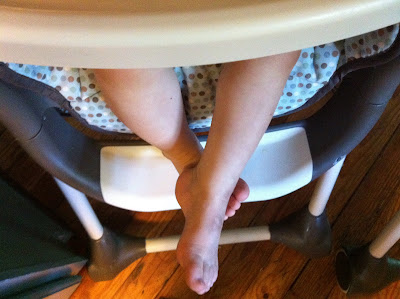 Henry is also a ringleader. 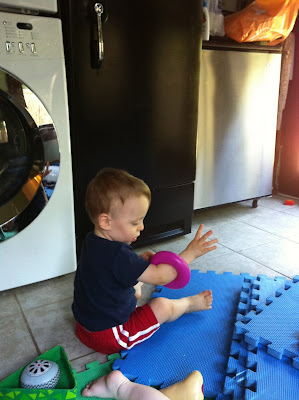