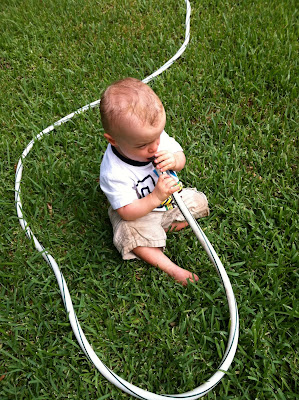 When do you consider your child a walker? Henry has been taking a few steps for several weeks now, but hasn't officially taking the plunge into full on walking. Luke started taking a few steps last week and I can officially say it's official. Luke's a walker! We're so proud.
# posted by Ashley @ 5:28 AM 0 Comments 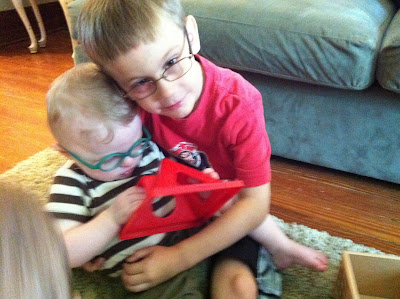 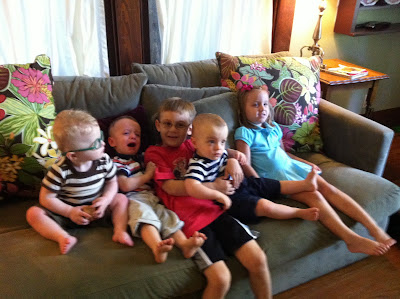 Paul and Claire paying the boys a visit. 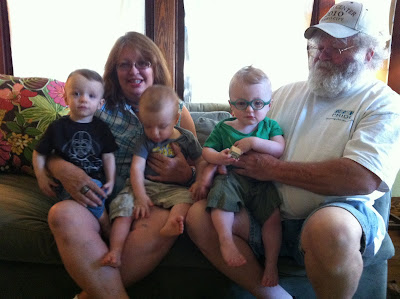 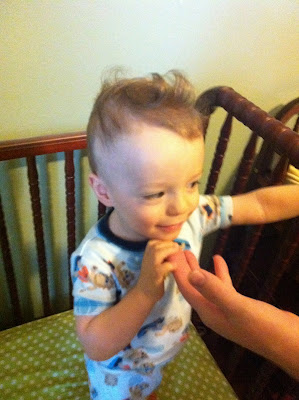 Please be a dear and fetch my sunglasses, Dahlin'. Luke 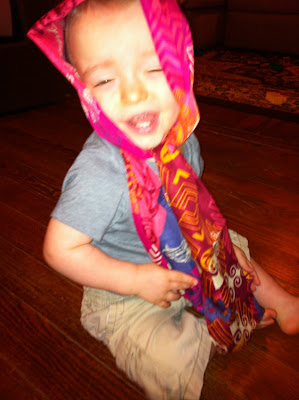 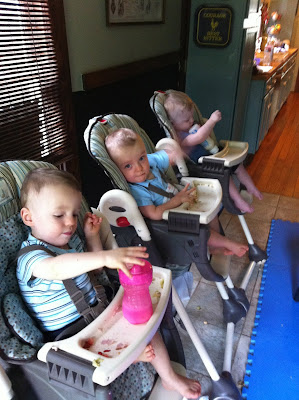 The other morning the Today show was talking about a Mom who admitted to hating her daughter. I tried to listen and watch the show, but life started happening. The boys were waking up, wanting to eat, to be changed, etc. I was thinking to myself that I couldn't imagine "hating" my child and what that would feel like. I love my boys so much, but even with all of this love I have for them there are times that I want to scream at the top of my lungs. I can't imagine how hard it would be to have to care for a child that you didn't care for or love. Because it's hard to care for these three boys at times and I love them to death.
Today at lunch we had some serious life happening. I always give Luke and Henry something to eat on their own while I try and feed August. It's a struggle getting August to eat and today has not been a banner day in the feeding department. My best bet on getting him to eat is to give him a toy. When he puts the toy to his mouth, I remove it and say "bite." Most times he'll open his mouth and let me feed him. Other times he just won't. So today at lunch, I'm trying to feed August. Luke starts throwing his food. I tell Luke "mouth" and he amazingly starts putting the food in his mouth. Henry's now crying for the toy that August has. Everyone's nose is running because everyone's teething. Henry no longer wants to eat and only wants milk. When given his cup of milk he drinks it and then throws it on the floor. Yet, he points to the cup when it's on the floor wanting it again. Luke now acts like he's finished eating as he has started throwing food and is not responding to me telling him to put the food in his mouth, not the floor. Luke then begins to rocking back in forth in his highchair, trying to get it to roll up to the washing machine. August is fascinated by all of this rocking and even more not interested in eating. I still try to get August to eat something, one bite, anything, despite all of the relentless rocking next to him. All of a sudden a piece of pasta and broccoli hits me in the forehead. "That's it. Everyone's Done", I yell. I begin cleaning off the highchair trays, washing hands and faces. I don't sweep the floor yet, which is always a big mistake. I get Henry out of his highchair, set him on the floor. He immediately goes for the food that's on the floor and sits in it, rolls in it, whatever he can do to somehow get it all over him. Don't dogs do something like that? Wait a minute, what's that smell? Great, Henry's pooped AGAIN. I get Luke down out of his highchair and take him to the living room. I get August down from his highchair and take him to the living room. While I'm moving these two guys, Henry is now grazing out of the highchairs and the floor. At this point, I'm thinking maybe I should just take out the middle man and throw the food directly onto the floor and let the boys eat from there from now on. I go and get Henry, bring him to the living room, change his diaper. I then go back to the kitchen to begin cleaning up from lunch before the ants, yes we have ants, carry off everything.
What does all of this mean? I don't know. There are usually a few times of the day that it gets extra busy, frustrating, insane and I think it's just life.
After everyone got settled from lunch we hang out in the living room. Henry wanted to read a Peakaboo book. So, I pull the guys up on the couch and we read it five times. Henry then gets down off the couch to look at the book by himself. Luke, August and I just hang out on the couch. It's really calm, quiet, perfect. Ahh, life is good!
# posted by Ashley @ 10:56 AM 0 Comments