First Day of Mother's Day Out 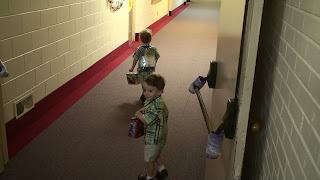 Luke and Henry started Mother's Day Out on Tuesday. When I asked what they did on their first day of "school" Henry replied, "played with lunch boxes." He loves his "Cars Movie Lunch Box" and even took it to bed with him Tuesday night. I talked to them a little bit about school on Wednesday and Henry said, "Henry stay at home with Mama." Neither Henry or Luke were as eager to go through their classroom door on Thursday, but it sounds like and seems that they ended up having a good day. Such big, sweet boys. August is on the waiting list for a school called The Rise School. I spoke to the director yesterday and still no openings. We'll just keep waiting and see what happens. 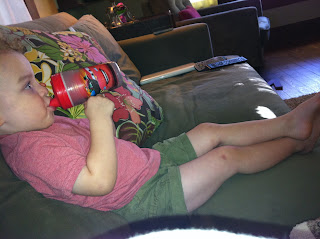 What you see here, is the Boss Man. He's in control, he leads the pack among his brothers and he gets what he wants (sometimes). Today he told me, "Mom, get me some bacon."What happened to this guys manners? I'm not really sure. When we remind him to say, "please" he just says, "yeah"in the sweetest little voice you have ever heard. I'm hopeful his manners will come back soon and I'm sure they will.