Happy Holidays from the Hale boys! 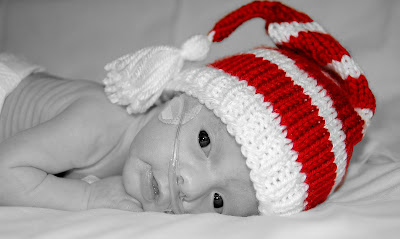 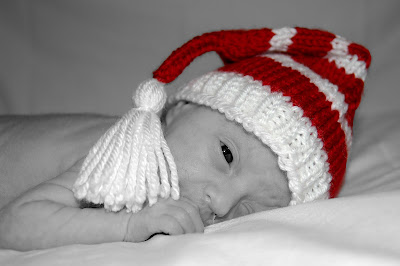 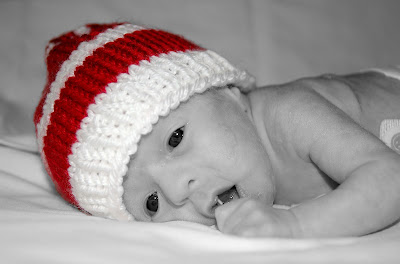 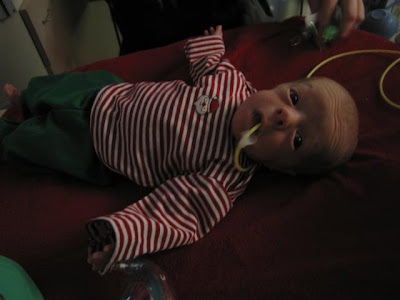 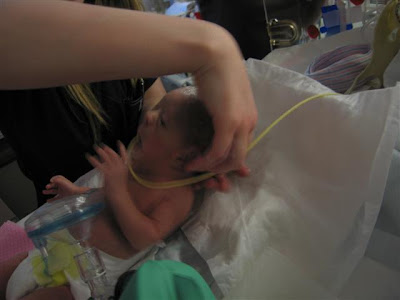 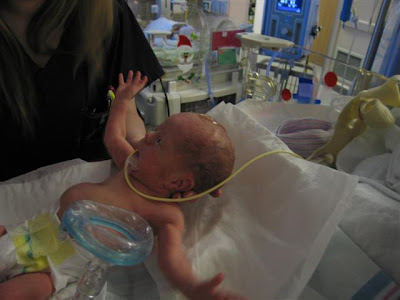 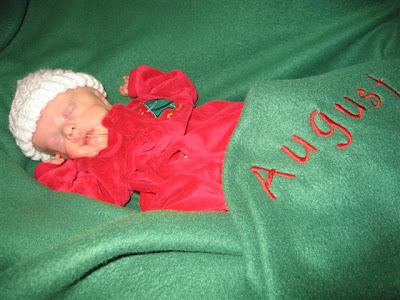 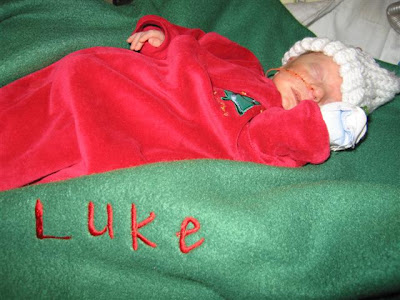 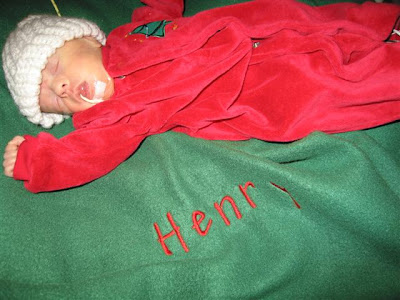 Luke was scheduled to be extubated (have the tube that goes into his lungs removed) last Wednesday. He decided to go ahead and self extubate and save his nurse the trouble. He also decided to pull his feeding tube out over and over and over again. We jokingly said that Luke had roid rage because he had been given steroids to help his lungs. Today Luke was much calmer. So far, Luke has done really well on his Sipap breathing machine. We're thinking Luke maybe had less weight gain this week because he was so wild and likely burned a lot of extra calories in his rages. At one point yesterday, I was holding Henry and could see a blanket flying around in Luke's isolette. He was raging pretty hard at that point!
Ashley
# posted by Mark @ 6:38 PM 0 Comments

Today I got to attempt to breast feed little August. It was truly one of the best days ever.
Ashley
# posted by Mark @ 7:11 PM 0 Comments

August is 3 pounds 14 oz and 16 1/2 inches long.
Luke is 3 pounds 10 oz and 17 inches long.
Henry is 3 pounds 7 oz and 15 1/4 inches long.
The boys had their first eye exams today. Because they're on oxygen there is the chance of damage to their retina and therefore exams are scheduled around 32 weeks. The boys will be 33 weeks this Wednesday. All of their exams were within normal limits. They'll have another exam in two weeks and we're hoping for more of the same.
The bigger news today was that August is now on a canula. The canula is a nasal prong that provides oxygen. I absolutely couldn't believe it when I walked into the nursery today to see August, the baby with the worst lungs at birth, on a canula. During the time I was at the hospital August did really well on the canula. At 34 weeks the babies can start bottle/breast feeding. So, if August does well on the canula, he could possibly not need his feeding tube as early as next week. This is super exciting and we're feeling very hopeful.
# posted by Mark @ 4:51 PM 0 Comments

Luke Didn't Save His Village 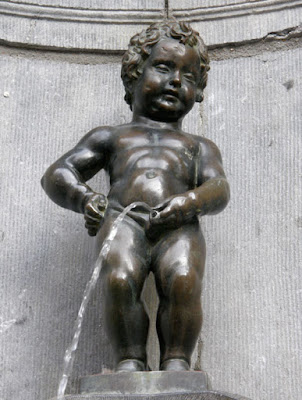 But he sure did pee all over me yesterday...

All the boys started out intubated as their little lungs were very premature. Intubation is a tube that goes into the mouth and down into the lungs to help people breathe. August was extubated on Dec. 1st and is now on a breathing machine called Sipap. The Sipap is a little mask that goes over the nose and provides a certain number of breaths per minute depending on the babies needs. August being extubated was a big deal as he started out with the worst lungs of the bunch. August started out on 20 breaths per minute on the Sipap and today they lowered his settings to 15 per minute. He is doing so great and all bets, right now, are on August coming home first. The next step for August will be to continue to wean his breaths per minute on the sipap and then for him to step down to a nasal cannula which are little prongs that go into the nose to supply air. Once the boys are on cannulas they can start working on bottle/breast feeding. The goal of getting the boys home is breathing on their own, eating with bottle/breast, and swallowing and breathing at the same time. So, we're getting closer everyday.
Henry was extubated on 12/8 and is doing great. He was so ready for that tube to be out. He is now wanting the feeding tube out. Lately it has been Henry vs. the feeding tube on the unit as he has pulled the feeding tube out repeatedly. I think Henry would be feeding himself and walking by now if the nurses would just give him a chance!!! Henry is still breaking hearts on the unit with his cute little self. He is more alert everyday and seems so much smaller physically then August and Luke. He's a little firecracker.
Luke is still intubated at this point. He is on some antibiotics that will run through Sunday and then the MD is going to give him a short dose of steroids to get his lungs ready. They're planning on extubating Luke early to mid next week and I know he's ready.
Overall, the boys are doing great and we're so ready for them to get home. Their little personalities are really starting to shine. August is super laid back, loves being held by his Mommy and just rolls with everything. Luke's personality is still developing, but we're predicting he will be the jokester based on some of the pranks he has pulled during his diaper changes. For instance, this week Mark called me and said, "I saw something today that I could never have imagined." Luke had a bit of an explosion during a diaper change. The explosion required him to be bathed from head to toe as well as an hour long cleaning of his little bed. Luke's nurse, Valerie, gave Luke quite the what for during his bath and it sounds like he won't be doing that again anytime soon. It appears Henry is going to be the little instigator and leader of the pack of the boys. Everybody who sees Henry just goes on and on on how precious he is. It appears he is using this adoration to his advantage as he is already a little ladies man.
One last thing, I got to hear August cry for the first time this week. With the tubes in, it prevents the babies from making sounds. So, hearing August crying was super sweet.
Ashley
# posted by Mark @ 9:04 AM 2 Comments 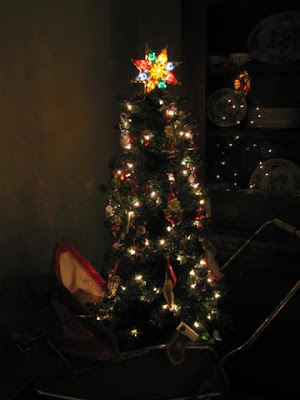 Aunt Paula found out we were not putting up a tree this year and brought over a tree all decked out in ornaments, lights, and a topper. There are three of each ornament and the babies each have their own first Christmas ornament. Thank you Paula and Carly!!! 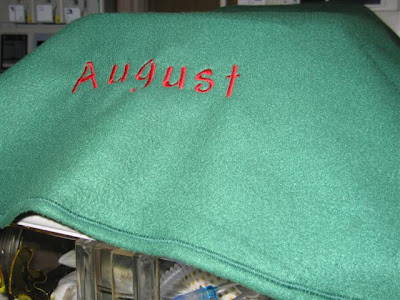 Valerie, August and Luke's primary nurse, made embroidered blankets for each of the boys.