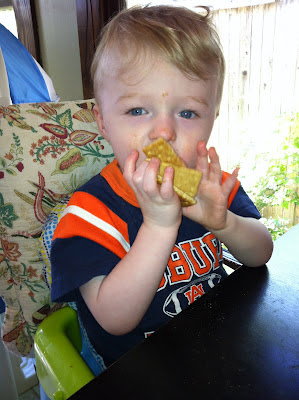 We've had some difficult days at our house. Actually, the last 42 days (six weeks) have pretty much been craptacular. August has had ear infections this entire time. Unlike his brothers who cry or are just overall more needy when they don't feel well, August instead bangs his head. It's an absolute helpless feeling seeing him do this. Today was the first day that felt like it was more of what our days used to be. For the last six weeks, Mark and I could not leave August's side. He would bang his head on everything, from the door facings, to the hardwood floor, bring toys to his head and bang with force. He had bruises on his forehead and an occasional cut here and there. We bought him some sweatbands to wear and at least it softened the blow. I've had days where I've cried, screamed, thrown things, called Mark 500 times at work telling him how frustrated I was, emotionally exhausted, etc. We had a very sunny day today and I'm hoping more are on our horizon. Mr. August is not so great at expressing himself verbally and this head banging stuff is his way of telling us that he feels terrible. I know someday he'll be able to tell us what he was thinking during all of these times. Even though August is verbally delayed, he understands what we're saying. He shows me this everyday. Mr. August, It has been so wonderful to see your smile, see you look at me with those beautiful blue eyes and to hear that wonderful laugh again. I love walking out of the room you're in and coming back to find you've wandered off to go and find a toy or whatever it is you're looking for because it feels like a long time since you've done that.
BTW, this is a picture of August with four graham crackers stacked on one another that he is licking all over. It makes for quite the mess, but who cares about that!
# posted by Ashley @ 7:48 PM