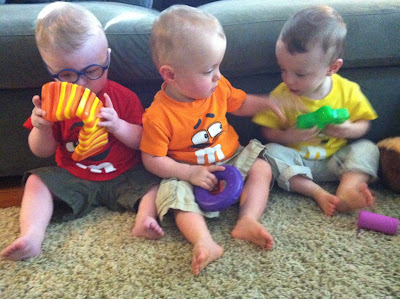 The boys had their 18 month check up today and all is good. They're actually almost 19 months.
August continues to make huge strides. He is now pulling up to stand and is eating. Hallelujah to that! He prefers fruit, but is taking some bites of vegetables and meats while pursing his lips in disgust. He started a feeding program through Baylor, but began eating the week before he started. It seems like something has clicked with him lately and we're so excited. He's also started being a little more vocal. August is still working with ECI for motor, speech and OT. He's also started PT at Baylor. We're proud of this little guy. August is wearing an eye patch for two hours a day on his right eye as his left eye was getting a little weak. August has the middle bed in his room and he and Henry have quite at time at night. Tonight August was standing in his bed and pulling on a lamb that's velcroed to his bed. He kept pulling it and swinging it towards Henry. This made Henry laugh hysterically, which made August laugh hysterically. Luke has learned to tune these two out. August continues to army crawl. He will actually crawl when he wants to pull up onto something. August weighed 23 pounds 12 ounces today and is 32.5 inches long.
Luke is still the champion eater. He is our Mikey and will eat anything. Luke has taken a few steps, but is super cautious. He is a speed crawler and thrower. He's stacking blocks, throwing toys, yelling, smiling and sometimes he does all of these things at the same time. Luke is also the first boy to go to sleep at night. Like his mother, he likes his sleep. Luke's current "thing" is throwing things over whatever he can find. I found a flip flop, toy, diaper, book, and all kinds of other stuff in a pack and play. He also loves throwing whatever's on the bathroom floor into the bathtub. Luke is using a sippy cup, but still loves his bottle. Luke cried last weekend when his GrandMommy and Da left and he is the first boy to do this. Luke loves his stuffed animals. He has a dog, frog, and monkey. The dog is by far his favorite. He talks to these animals and it is the cutest thing. Luke weighed 23 pounds and 7 ounces today and is 31.5 inches long.
Henry still loves his Mom. Henry has a really low voice, but it's getting stronger. He is saying cat, dog, bottle, Mom, Dad, cup. He seems to understand most things we say, but hasn't quite figured out how to communicate back to us, for the most part. Henry has taken several steps, but hasn't taken the leap into walking yet. Henry will be in the middle of the floor and stand straight up without holding onto anything. He can so walk, but whatever. He's been crawling for what feels like years. He likes to do somersaults (with assistance), climb on the furniture, stand on his head, and look at books. He brings books to us for us to read to him and I love this. Henry weighed 20 pounds 9 oz and was 31.5 inches long. Henry is still really tiny, but has had the best weight gain recently. We give him this stuff called benecalorie which is a clear liquid full of calories to put in his milk. We try to give him 600 extra calories a day. He's drinking a ton of milk from his sippy cup and eats a huge variety of food. He just eats a small amount and doesn't stop moving, even when he sleeps. Henry still enjoys staying up a little later then we would prefer on most nights. Henry also loves his stuffed animals and uses them to roll over. Henry can point to his head, feet, tummy, ears and nose.
# posted by Ashley @ 7:16 PM

Comments:
Lots of progress by everyone! Love the M&M shirts!