Everyone is happily waiting to see the MD and get flu shots. 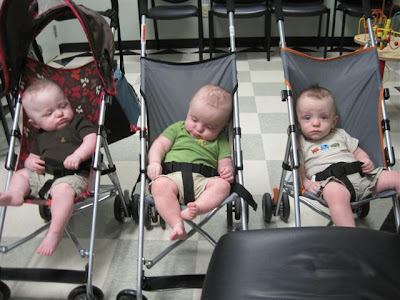 The boys had an appointment with their pediatrician today for developmental evaluations, weights and lengths and to evaluate their eating.
The developmental evaluations all went well.
August is sitting with support and is getting close to sitting on his own. He's still working on rolling over and his arms are getting really strong from pushing himself up. He's also been working on his leg strength and has been doing leg squats, in his spare time. Luke is also getting close to sitting on his own. He has one tooth that's come through and another one that's just barely starting to show. Henry has started army crawling and gets on all fours and rocks constantly. We expect him to start crawling any day. Henry also has two little teeth that have come through.
August wins the weigh in, again. August now weighs 20 pounds 9 oz and is 28 inches long.
Luke weighs 19 pounds 1 oz and is also 28 inches long.
Henry weighs 16 pounds 10 oz and is 27 1/2 inches long.
Everyone is still taking a bottle but we got the go ahead to not have to wake anyone up in the morning to feed them. We had been waking the guys up at 5am to feed them a bottle and then putting them back to bed. Luke typically wakes up around 5, so we'll see how long he will be willing to sleep tomorrow. Henry is definitely the champ when it comes to eating baby food. We're going to start making their baby food and give them some finger foods, like chicken wings. The guys go back to the MD in a month for a second flu shot and their one year shots. Our MD also reminded us that RSV season is about to start and the guys will be on "lock down" again when it comes to visitors. We'll try to take more pictures!
# posted by Mark @ 3:55 PM