One year ago today we found out we were having three whole babies. 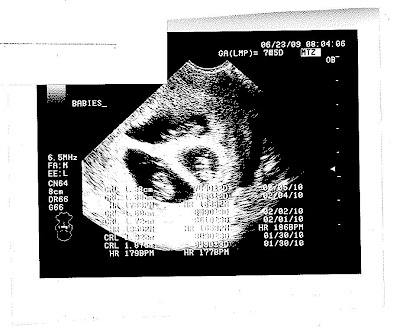 Not one, not two, but three babies. When the Doctor told us the news, Mark went to his knees. I did this weird laughing/crying thing. We saw three tiny heartbeats and were in total shock. The Doctor told us that having triplets was not a positive thing due to the complications that could occur for the babies and myself. We were hopeful for just one little baby, but having heard a week or two prior that my HCG level (whatever that is) was high, we had guessed that maybe we were going to have twins. We took a few minutes to let the news sink in and then had to, unfortunately, head back to work. What a crazy day that was. Our biggest fear of having multiples was coming true. When Mark came home from work, we just looked at each other and would start laughing. What else could we do? We were in total shock, disbelief and hesitant joy at the same time. I can now say, without a doubt, that I would do it all over again, in a heartbeat. These three little babies have turned out to be the most precious things in our life. I know Mark and I were initially worried about having the time or being willing to make the time for one baby, much less three. I have not once thought that I wish I were doing this or that, instead of being with these sweet baby boys. They have changed our lives and we both love them so dearly. AAAH. What sweet boys!!!
One year later and here they are. 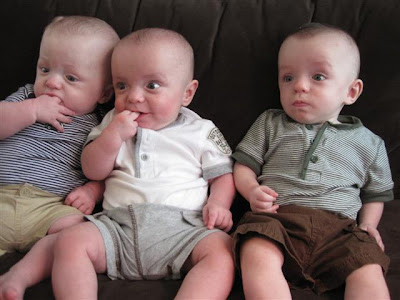 P.S. We took about 100 pictures tonight and we couldn't get these sweet boys to smile at the same time. They seem to have minds of their own.
Ashley
# posted by Mark @ 4:37 PM

Comments:
What a year! Three precious little boys and a wonderful mother and father make one happy family! Lots of love to you all!