Sunday was a big day for the Hale Boys. We walked in to find August just laying in his bed relaxing with no Oxygen. He did get put back on Oxygen around 8pm last night but made it for about 10 hours without needing it. Go AUGUST!!
Luke was allowed 6 hours of Sipap freedom on Sunday. The below picture is of Luke trying to look inconspicuous, hoping his nurse Crystal would forget to put the Sipap back on. 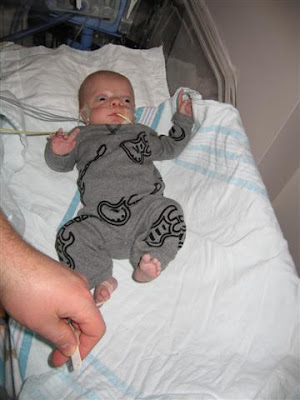 Regarding Henry. Henry was offered a chance of no Oxygen, but declined at this time. They'll check back with him later this week to see if he's ready. Henry and Luke got a bath yesterday and Henry still managed to take about 40 ml's of his bottle after the bath. The boys are super relaxed and sleepy after their baths so this was no small feat.
The boys continue to prevail in stinking up the unit. Apparently, there has never been a pod in Baylor history that has smelled as badly as the boys does. I can't imagine what it's going to be like when they get home. I hope that Diaper Champ knows what it's in for.
We'll post the weights later.
Ashley
# posted by Mark @ 7:28 AM