August is 6 pounds 4 oz and 19 inches long.
Luke is 5 pounds 9 oz and 19 1/2 inches long.
Henry is 5 pounds 15 oz and 18 1/4 inches long.
Recent happenings include August being stepped down to a low flow canula as opposed to the high flow one he was on. August is continuing to take a bottle a day and will hopefully be increased to two bottles sometime this week. The boys have to take 8 bottles per day before they can come home. Luke is still on Sipap and is coming down on his oxygen needs. The plan is for him to stay on Sipap until later next week and then step down to a high flow canula with a boost of steroids. Hopefully, the extra time on Sipap will help his little lungs get that much stronger and help him to continue to put the weight on. Luke is taking a bottle per day. He's not taking a full bottle, but he's giving it all he's got. Luke's got a corpak tube (feeding tube that goes to his intestine) that goes in his mouth and it makes it hard for him to get a good seal on the bottle. The Sipap is also not doing him any favors!! Henry continues on his two bottles per day. One word for Henry is sloppy. He sometimes forgets or lacks the coordination he needs to take the bottle. He can go to town on a pacifier, but the bottle throws him off a bit. He's getting there though. 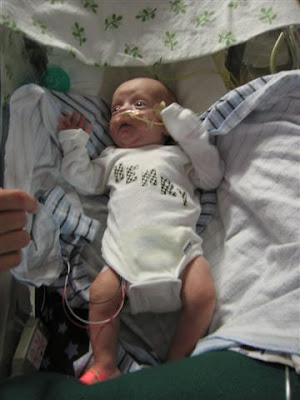 Picture of Henry responding to being called sloppy.
Ashley
# posted by Mark @ 5:28 PM